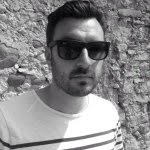 From Tuscany to Peckham, Cavalli to concrete, Native Londoner Ben Anders is in constant pursuit of the untold stories of people and places, exploring the unknown and exalting the overlooked.

The son of serial home renovators, he grew up surrounded by remarkable interiors in homesteads ranging from Northwest London to an old farmhouse in Wales. Ben’s appreciation for design, structure, and form initially led him to pursue architecture, but he slowly realized that he preferred to envision spaces through his lens rather than his pencil. He studied photography and design at Cheltenham to degree level, then returned to London to begin his career.

While shooting for the UK’s most esteemed commercial and editorial brands, Ben has maintained a passion for the deliberate approach and thoughtful composition that interior photography demands, and he delights in telling stories of people through their singular spaces.

Though always innovating, he frequently returns to familiar constants: family camping trips, old cars (including his own 30 year-old Mercedes coupe), Blade Runner, and the color blue.

Ben is the recipient of The Agent's Club 2020 award for best photography in the Interior Commissioned category.